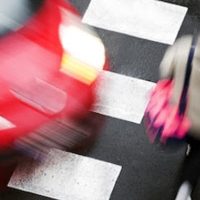 Charges have yet to be filed against a woman who struck a pedestrian and then fled the scene. It is unclear what happened, but it’s believed that the pedestrian was not in the crosswalk at the time of the accident. In other words, the accident may not have been the driver’s fault at all. However, because she fled the scene of an accident involving an deceased pedestrian, she can be charged with a first-degree felony which has a maximum sentence of 30 years. Had she stayed at the scene, she might have faced a DUI manslaughter charge, but the sentencing range for that charge is half as long. In both cases, there is a mandatory minimum sentence of 4 years.

We don’t know much about what happened other than the fact that a woman struck a man and then fled the scene of the accident. Several witnesses saw what happened and the woman was tracked down shortly after the accident occurred. The man was taken to the hospital, but he did not survive his injuries. Had the woman stopped, it’s possible she would have been charged with DUI manslaughter. This may explain why she didn’t stop in the first place. However, it’s easier to defend against charges of DUI manslaughter than it is to defend against charges of fleeing the scene of an accident. Additionally, the cap on sentencing is 30 years as opposed to 15, which is the maximum for DUI manslaughter. In both cases, an individual who pleads guilty or is found guilty to either crime must serve a minimum sentence of 4 years.

What to do if you hit a pedestrian

There’s no defense to fleeing the scene other than mistaken identity, in most cases. If you’re unsure of what to do, call a lawyer immediately after calling 911. Tallahassee criminal lawyer Luke Newman, P.A. can help you raise a strong defense to the charges. Call today to learn more.