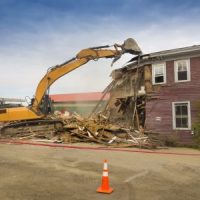 Florida police did not execute a search warrant on a home—they executed the home itself. In other words, they forced the demolition of a house that had an extensive criminal history. Perhaps you didn’t know that police could do that. However, neighbors had complained about the property several times to authorities who had answered more than 20 calls related to individuals within the house. There were also allegations that the structure itself was unsafe, unsanitary, and accrued garbage too frequently.  The garbage complaints prompted neighbors to alert authorities.

Police report that calls have centered around domestic disturbances, active batteries, drug manufacturing, and weapons charges. The house was deemed a nuisance by local authorities. Authorities issued a final notice of demolition alerting residents that they had to vacate before the demolition occurred. Any vehicles found on the property would have likewise been seized and impounded. The cost of the demolition has now placed as a lien on the empty property. So, if the owner ever wants to sell the lot, the cost of the demolition would be taken from the proceeds.

They did it, so that’s the first thing you need to know. It is possible that the property owner did not respond to numerous requests related to the property, but it is unclear at this point who owned the property or whether or not it fell under squatter’s rights. Nonetheless, law enforcement officials are increasingly choosing to demolish properties that attract chronic criminal problems. This includes drug crimes but is generally related to the manufacture and sale of drugs as opposed to simple drug possession.

In cases where the neighbors issue several complaints against a property, local law enforcement can work alongside municipal authorities to demolish the structure(s). The basis for this demolishment was both structural problems with the building and chronic criminal activity. Nonetheless, there is considerable unease over government razings related to criminal activity. Landlords, for instance, do not want to be in the position of policing their tenants because that’s not really their job. Further, they don’t want to lose their property because a tenant conducts illegal activity. In the case mentioned above, it appears unlikely that there was a landlord who fought against the order to demolish. In some cases, the landlord of a property dies and the property remains abandoned. Squatters move in and create problems for the neighbors. The squatters are unlikely to have the legal clout to fight the order, in which case the government has a clearer path to demolition.

Cities across the country are spending lots of money to demolish abandoned properties.  Studies indicate that there is no overall reduction in local crime emerging from these demolitions. But area neighbors appear pleased with the result.

Talk to a Criminal Defense Attorney in Tallahassee

Tallahassee criminal lawyer Luke Newman, P.A. represents the interests of individuals (not homes) charged with crimes. Call today to schedule an appointment and we can begin preparing your defense immediately.